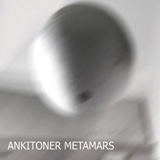 ANKITONER METAMARS is a project by Anki Toner (Superelvis) and Javier Piñango (Cerdos, Mil Dolores Pequeños, Destroy Mercedes, Druhb) which turns out to be the first public activity of the former in this century. In spite of living 600 km apart from each other, the band has prepared a live repertoire and recorded their first album in just a few months. The recording has been done between august and december 2006 in Barcelona and Madrid. It features six new songs and a cover of Leonard Cohen's "Hallelujah". New York singer and poet Lydia Lunch adds vocals to track 6, "Emotion".

Recorded and produced by ATM at Polisemia (Barcelona) and El Laboratorio del Pez (Madrid) between august and december 2006. Mastered by Jaime Munarriz at Ectoplasma Estudio in march 2007.